Book Review: "My Heart Is a Chainsaw," by Stephen Graham Jones 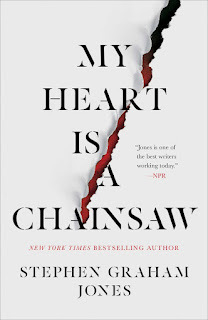 A new book from Stephen Graham Jones is always a joy, as far as I'm concerned. Luckily for me, his imagination never seems to slow down for too long, so those new books tend to arrive frequently. The Only Good Indians was the best horror work of 2020 for many, myself very much included. It was terrifying and heartbreaking and unlike anything else the genre had offered up in quite some time.

His newest, My Heart Is a Chainsaw, is equally as strong. It's the story of Jade, a horror slasher fan stuck living with a deadbeat dad as she goes through the motions to graduate from a high school she hates in a town, Proofrock, that she hates even more. When a fascinating new girl named Letha shows up and corpses start to be discovered, Jade realizes that she might be living through one of the slashers she loves so much... and that Letha might be the final girl such a story requires.

Of course, it's all delightfully more complex than that. Letha's father is part of a group of fellow rich men building themselves a fancy new housing development out across the water, and the townspeople aren't all fans of the situation. As for Jade, she might want to be done with school once and for all, but she might be more attached to Proofrock than she lets on. She's particularly fond of her history teacher, Mr. Holmes, and Jones cleverly weaves in some of the papers Jade is writing for this history teacher throughout the novel. Each one of her papers is about slasher movies, of course, and while they might not be exactly what her teacher wants from her, they give us as readers great insight into Jade's life -- her expectations, fears for the future (and from the past), and hints of the carnage to come if she really has found herself smack-dab in the middle of her own slasher flick.

Letha seems to know there's some hidden complexity driving Jade's actions, but can Jade manage to convince Letha of her own important role to play in the unfolding horror? The town sheriff, Hardy, also dedicates himself to trying to steer Jade right... when he's not actively getting in the way, of course. I have no interest in spoiling the ways that the stories of the new housing development, the aging sheriff, Jade's father, and a major trauma hiding in Proofrock's past begin to intersect, but I will say that Jones doesn't skimp on the one element of the slasher that we've all come to expect: Violence. The final third of this book is impossible to step away from. It is page after page of chaos and gore working to bring some truths into sharp focus while tearing many other parts of the story -- people included -- apart.

What Jones has pulled off here is a slasher about slashers, then. A story that will pull at your heartstrings, get you to chuckle at some bleak humor, and then surprise you about fifteen separate times before the dust settles. If you're not already a fan of the same movies that Jade is, this book will walk you through a history of gems and misfires, madmen and final girls. It's not referential for the sake of being referential or some winking slice of meta fiction, though. It's a story of a girl rationalizing her own existence through the genre she loves, a genre that Stephen Graham Jones obviously cares deeply about himself.

It's a horror story for horror fans, but it never feels exclusionary because of its greatest strength: Jade. She's one of the best horror protagonists in recent memory. Excellent work once again, Mr. Jones.


I received an advance copy of this book for review. It will be released August 31, 2021.

Matt Aaron Harper
A lifelong fan of storytelling in all its forms, I'm here to post reviews (of films, games, books, and more), original works of fiction, and whatever else I find interesting at any given time. I've had an affinity for horror stories since I was very young. I spent my youth staying up late to watch the Universal monsters on local TV and ignoring most of my classwork to make my way through every Stephen King book I could get my hands on. I studied English at a small college in Illinois and wrote for several publications while there.